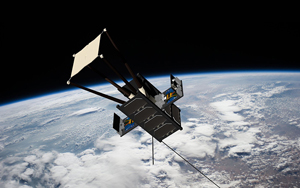 “HIROGARI”, which was launched from the NASA Wallops Flight Facility (USA) on February 14, 2021 and released from the International Space Station (ISS) on March 14, 2021, is still in operation.

Mission 1: Deployment and shape measurement of the Miura-Ori two-dimensional unfolding structure panel ― “Expanding” the future of the large-area structure

In recent years, to perform more advanced missions, satellites are increasingly required to carry large-area structures, such as solar panels, which require high storage capacity due to transportation constraints. As such, it is necessary to measure on-orbit whether the large-area structures meet the shape requirements under the severe space environment. In the “HIROGARI” project, we have been developing the Miura-Ori, using an origami engineering technique to store a two-dimensional open-plate structure and deploy it into space. In addition, an optical surface profile measurement system using a two-dimensional grid has been installed to demonstrate its usefulness. Although there have been applications of Miura-Ori structures in space in the past, this is the world’s first demonstration in space from the perspective of origami engineering, where thickness is taken into account.

On April 4, 2021, “HIROGARI” confirmed the deployment of the two-dimensional unfolding structure panel (now on referred to as “panel”) for the first time. A comparison of dozens of images taken since then confirmed that the paddle, volute spring, and panel gradually expanded and extended. Here, we confirmed two points: the outer edge of the panel was expanding and approaching its original deployment state, and there was no environmental deterioration of the hinge tape or panel material.

After confirming the deployment of the panel on orbit using two camera images, we analyzed the images using a method based on an optical shape measurement method called Granting Projection Method.

To evaluate the practicality in operation, during analysis we compared the measurement results from a method that compresses the entire image and sends it at once, and a method that divides the shooting area into five and sends multiple images while maintaining a high resolution.

We have confirmed that our measurement method is effective in space by using images taken by this five-region segmentation method. In addition, by measuring the distance in the image as a supplementary measure and estimating the deployment angle of the paddle and panel on which the measurement camera is mounted, we were able to confirm an increase in the deployment angle over time.

In the past, many amateur radio satellites used communication speeds of 1.2kbps and 9.6kbps on UHF and VHF. In addition, they mainly use AX.25, which requires a retransmission request from a station on earth in case of packet loss, which increases the cost of operating a satellite. Therefore, “HIROGARI” adopted the faster 13.6 kbps GMSK and 19.2 kbps 4FSK, as well as a protocol using Reed-Solomon codes with error correction capability and a protocol combining Reed-Solomon codes with convolutional codes. We have demonstrated the usefulness of these communication technologies and aim to achieve a higher efficiency.

We are currently providing a message box service using amateur radio and “spread” the interaction among not only amateur radio operators but also those who don’ t use amateur radio. We are inviting messages from all over the world and sending selected messages to “HIROGARI” to be sent out to the world. We are also receiving comments from amateur radio operators who received the messages and publish them on the Internet. For more information about the service, please visit the Amateur Radio Mission Site.

9: Industry, innovation and infrastructure
17: Partnerships for the goals

Email kogiso[at]aero.osakafu-u.ac.jp *Please change [at] to @.