Researchers have used the latest wireless technology to develop a new radio receiver for astronomy. The receiver is capable of capturing radio waves at frequencies over a range several times wider than conventional ones, and can detect radio waves emitted by many types of molecules in space at once. This is expected to enable significant progresses in the study of the evolution of the Universe and the mechanisms of star and planet formation.

Interstellar molecular clouds of gas and dust provide the material for stars and planets. Each type of molecule emits radio waves at characteristic frequencies and astronomers have detected emissions from various molecules over a wide range of frequencies. By observing these radio waves, we can learn about the physical properties and chemical composition of interstellar molecular clouds. This has been the motivation driving the development of a wideband receiving system.

In general, the range of radio frequencies that can be observed simultaneously by a radio telescope is very limited. This is due to the characteristics of the components that make up a radio receiver. In this new research, the team of researchers in Osaka Prefecture University (OPU) and the National Astronomical Observatory of Japan (NAOJ) has widened the bandwidth of various components, such as the horn that brings radio waves into the receiver, the waveguide (metal tube) circuit that propagates the radio waves, and the radio frequency converter. By combining these components into a receiver system, the team has achieved a range of simultaneously detectable frequencies several times larger than before. Furthermore, this receiver system was mounted on the OPU 1.85-m radio telescope in NAOJ’s Nobeyama Radio Observatory, and succeeded in capturing radio waves from actual celestial objects. This shows that the results of this research are extremely useful in actual astronomical observations. 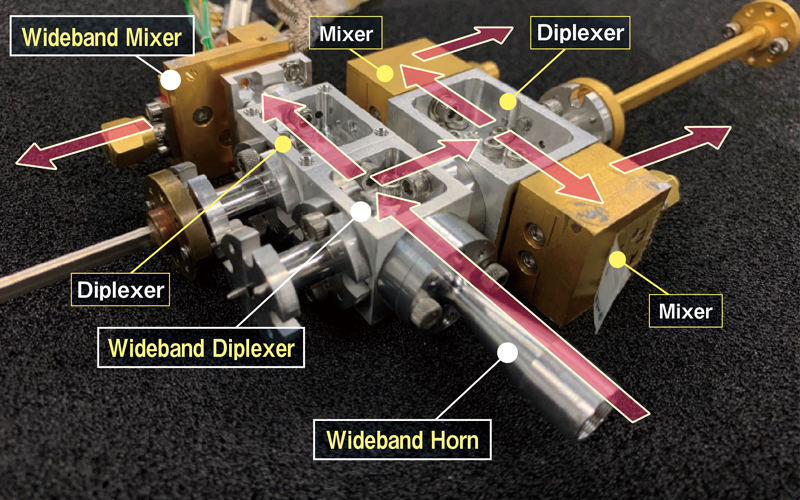 Newly developed radio receiving system. The radio waves collected by the antenna are directed to the receiver through the horn at the lower left of the photo and follow the path indicated by the arrow to be output.
Credit: OsakaPrefecture University 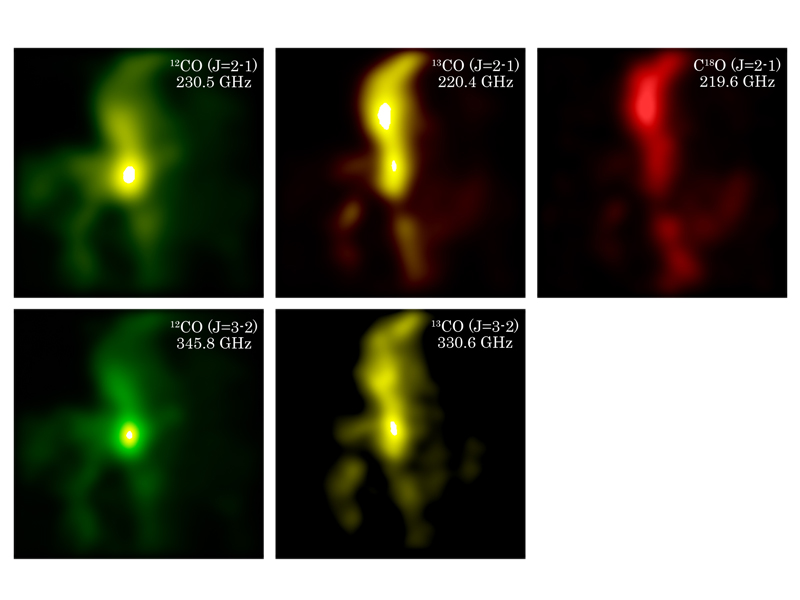 Distribution of CO isotopologues in the Orion molecular cloud observed simultaneously with the newly developed broadband receiver. The C18O (J=3-2) emission line was also observed, but is not shown because the radio signal strength was too weak to obtain an image.
Credit: Osaka Prefecture University/NAOJ

“It was a very emotional moment for me to share the joy of receiving radio waves from the Orion Nebula for the first time with the members of the team, using the receiver we had built,” comments Yasumasa Yamasaki, an OPU graduate student and the lead author of the paper describing the development of the wideband receiver components. “I feel that this achievement was made possible by the cooperation of many people involved in the project.”

When compared to the receivers currently used in the Atacama Large Millimeter/submillimeter Array (ALMA), the breadth of frequencies that can be simultaneously observed with the new receivers is striking. To cover the radio frequencies between 211 and 373 GHz, ALMA uses two receivers, Band 6 and 7, but can use only one of them at a given time. In addition, ALMA receivers can observe two strips of frequency ranges with widths of 5.5 and 4 GHz using the Band 6 and 7 receivers, respectively. In contrast, the new wideband receiver can cover all the frequencies with a single unit. In addition, especially in the higher frequency band, the receiver can detect radio waves in a frequency range of 17 GHz at a time. 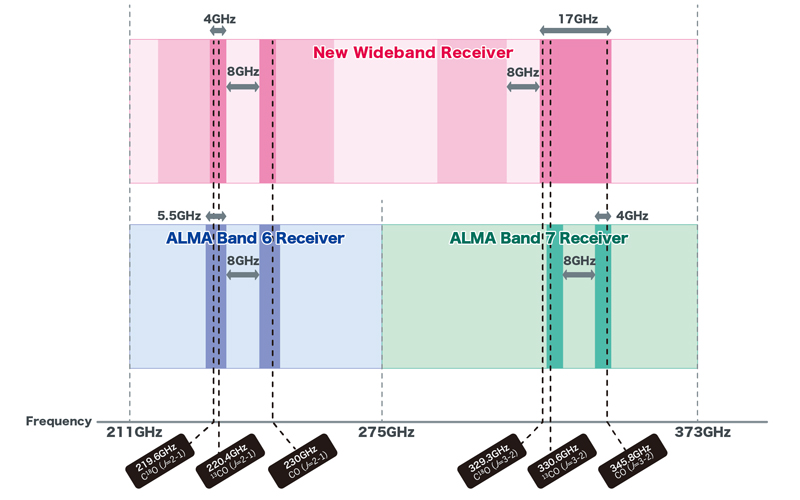 “It was a very valuable experience for me to be involved in the development of this broadband receiver from the beginning to successful observation,” says Sho Masui, a graduate student at OPU and the lead author of the research paper reporting the development of the receiver and the test observations. “Based on these experiences, I would like to continue to devote further efforts to the advancement of astronomy through instrument development.”

This wideband technology has made it possible to observe the interstellar molecular clouds along the Milky Way more efficiently using the 1.85-m radio telescope. In addition, widening the receiver bandwidth is listed as one of the high priority items in the ALMA Development Roadmap which aims to further improve the performance of ALMA. This achievement is expected to be applied to ALMA and other large radio telescopes, and to make a significant contribution to enhance our understanding of the evolution of the Universe.

Journal Information: Publications of the Astronomical Society of Japan